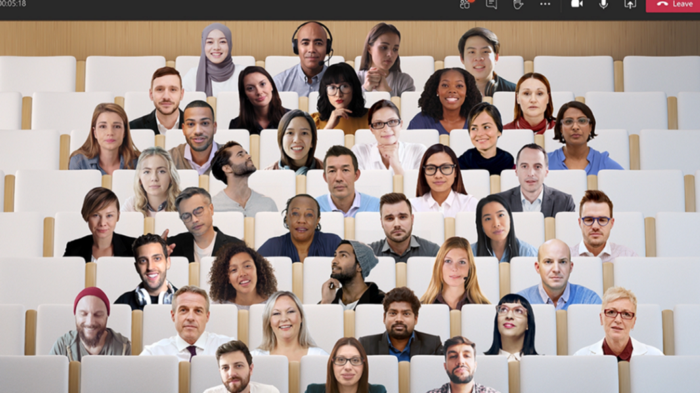 How many times have you heard “ You’re on mute”, “Can you see my screen?” or “Can you hear me now?” over the last year? I’m guessing quite a lot as our use of VC technology escalated.

Video conferencing has come a long way in the past 12 months as working from home became not just the norm but advised by government. Connecting remotely in a way that felt natural became the top focus for a number of technology companies including Google, Microsoft and Zoom.

Before the pandemic Zoom was a startup and was doing well but mainly in the USA, it has started to make some ground in other territories but it was a bit of a slow burner. Then COVID happened, and boom, Zoom is the number one video conferencing plaform. Zoom became a verb in a similar fashion as Google did years ago.

But Zoom, Google Meet, Microsoft Teams, Slack, etc never felt natural, you still had the same issues you had with Skype 15 years ago. Constant talking over each other, forgetting to unmute yourself, shocking camera quality, etc. If you think about it video conferencing hasn’t changed much in nearly 20 years. We need to change how we think about video conferencing and what we’re trying to achieve with it.

Software has reached most of its potential for now, with features such as Together Mode on Microsoft Teams, blurred backgrounds and augmented reality filters in Zoom. Most features added now feel a little gimmicky and don’t massively enhance the experience.

The biggest problem with VC is that you feel disconnected with everyone else, which ironically, is what it’s trying to solve.

VC needs to evolve, it needs to remove the barriers and make us feel like we’re in the same room.

To achieve this one thing needs to change, hardware. The devices we use need to be better designed for video conferencing. We’ve been stuck with a poor quality cameras and microphones for too long. We’ve reached a point where computing power is incredible and connectivity is pretty solid and speedy, we’re being let down by peripherals.

Google recently announced their ‘Starline’ project which aims to immerse you in a call.

It uses multiple cameras and a 3D screen to create an incredible experience. Adding depth and clarity to the call really does break down the barriers.

‘Starline’ does feel a bit like you’re talking to a prison inmate.

This technology is still very early days even though Google has been working on it for a number of years. To make this available to you and me the technology needs to be in every device we communicate through. That means our devices need multiple cameras and 3D screens to make this a reality. Pretty much all laptops and tablets only have one front facing camera that provides OK quality, you’ll need at least two high quality 4K cameras to make this happen. Then there’s the screen it needs to be 3D to provide depth. A 3D ‘Retina’ display isn’t cheap and most likely won’t be available commonly for a number of years.

3D displays haven’t had a decent use case until now, think 3D TVs. The biggest problem with 3D displays is that they only work with one person, you can’t have multiple people look at the same screen. This is because the camera tracks your face and changes what’s being displayed to match the position of the viewer, it can’t show two different positions at the same time. This won’t be a problem with home working as most of the time it’s one person in front of a laptop.

So yes, video conferencing is OK for now, but it needs to change soon in a significant way.

What would you like to see happen with video conferencing?