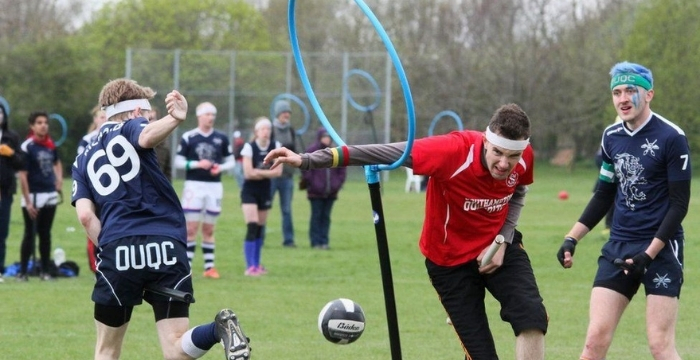 It’s 2021, The pandemic is over; our sports fields are re-opening. And while some of us had the willpower to maintain some level of fitness. For the rest, blurry days and inactivity thumped  us on the shoulder and naturally, we caved.

Now that we are in full flow, you are probably looking for ways to get moving again.

I bet that with that same motivation, you are also looking to see friends and family more regularly as part of a similar mission. As an organiser, you seek to bring people together. There's no better excuse to do so than with sports. Traditional sporting options remain valid, but we want to open your minds to some more unusual options that may not have appeared on your radar just yet.

From Frisbee to Quidditch, These are our top 5 unusual group sports to consider in 2021!

Traditionally players are to toss the Frisbee from one partner to another.

Collecting points totally at your discretion. It is a favourite amongst the average beach and park goer and was made infamous by The Inbetweeners.

Now prepare to have your socks blown off!

Ultimate Frisbee eschews tradition. It is a non-contact game played with a disc across three zones. Described as a cross between American football and netball, players must attempt to throw the disc to a teammate in a nearby zone. Should they be successful they win a point; if not - they don’t! It’s as simple as that.

Self-officiated, Ultimate has been praised for its encouragement of communication and empathy. And due to its non-contact status, it has become a great option for families.

All you need is markers, people and a disc!‍

For more information check out the UKU website, the governing body for Ultimate in the UK!

UK Kabaddi has a strong presence within the army, who compete regularly in the Kabaddi world cup.

In 2008, the first European Kabaddi championship was held in Italy in front of 20,000 spectators, further highlighting the growing popularity.

It has a historic presence in India where it originated but is now gaining momentum in the west.

So what is Kabaddi?

Kabaddi is played in teams of 12, with only 7 permitted on the field of play at any given time. Teams alternate between attacking and defending, with the underlying aim to score more points than the opposition. (straightforward so far right?)

You gain points by removing the opposition from the game, depending on whether you are attacking or defending, you do this in different ways.

When attacking, the ‘Raider’ must hold their breath and rush into the opposing zone. By touching a member of the defending team they will subsequently be ruled out. However, should the raider be fondled - aggressively and to the floor - the tables will have turned and he himself will now be out.

How does one prove their breath has been adequately held?

The answer? by repeating the phrase ‘Kabaddi’ aloud; vigorously. Failing this, even for a split second and the player will be eliminated.

Kabaddi is designed for adrenaline junkies. The blend of agility, strength and presence of mind is quite difficult to replicate in another capacity.

Certainly, those who play the game agree that the zest experienced is difficult to replicate elsewhere. Which would go a long way in explaining its growth and popularity worldwide.‍

Contact the EKA via their website to find out more about UK Kabaddi; for the latest information about how to join!

Originating in Denmark where the first rules were published in 1906. Handball may already be familiar to UK residents, due to its prominence in schools.

Existing somewhere between football with hands and basketball with goals. The average Handball player runs 5-6k per game. And that player would be one of 19 million worldwide.

It's a sweaty one, no doubt.

So what are the rules; how can I play?

Like Kabaddi and Ultimate. The objective is to score more points than the opposing team. Each team consists of six outfield players and a keeper. You throw the ball into the opposing net to score. The winner is the team with the most points at full time. However, there can never be a draw, with an extra time and penalties system in place.

Once in possession, the player can either hold, shoot or pass the ball. Players are permitted to dribble or take three steps for a total of three seconds before being forced into releasing the ball via one of the former.

Pretty straightforward right? So how can I get involved?

The UK has a well-established Handball league system for both men and women. And while these belong largely to professional establishments, you can contact and find your local way to get involved via the Handball Associations website. ‍

The link for which can be found just here

Like Ultimate. Bike Polo is a callback to a classic, but with a twist.

A sport historically associated with the upper classes, The original horseback Polo had lost touch with the working class due to its un-accessibility and reputation as a wealthy sport.

Bike Polo stands to bridge that gap. The rules are mainly the same, but how does one target an audience without Horses?

The answer is by swapping horses for bikes! Every Tom, Dick and Harriet has one!

There is currently no governing body in the UK. As a result, Bike Polo is yet to be recognised by Sport England. Despite this, significant efforts are being made to expand the sport by the regional federations. The most prominent of which belongs to Manchester.

How to play Bike Polo?

Need a refresher on Polo? Fair enough, it’s not something the average Joe would have encountered growing up.

There are four players per team, with each position represented by the number on their back. Number one being the most offensive and then descending accordingly.

The winner is simply the team with the most goals at the end of the game. Unlike most sports, the half is switched around for every goal scored. An unusual tradition that originated from the players not wanting extended periods facing inevitable English wind.

Historically played with home-crafted mallets, Bike Polo substitutes horses for Bikes which subsequently makes the sport more accessible for those looking to explore a new sport.

How can I get involved?

There are many regional areas including Manchester and Birmingham with their own committees. It may be worth googling and finding your local association with many sports centres also opening their facilities to the sport! ‍

Anyhow here is a link to the website for the Manchester version!

Originating in the US; taking all inspiration from JK Rowling's classic books. Quidditch is real!

There are over 30 teams in the UK. A fast-paced, mixed-gender sport.

So how do I play?

Get ready for this one. It may be more complicated than Kabaddi.

Each team has a squad of seven players. Within these players, they segregate into four major roles.

Three chasers. Two beaters. One keeper and one seeker.

Chasers defend and attack the hoops using a large ball named the Quaffle. The keeper will then defend the hoops. The beaters will try and disrupt opposition play by throwing another ball named the Bludger. Anybody hit by a Bludger must dismount their broom, drop the ball they are carrying and run back to their post to re-enter the field of play.

This leaves the Seeker.

A seeker must catch the Snitch. In the books, this is a small enchanted flying ball that is notoriously difficult to catch. This is replicated in real life by a Snitch Runner, who attaches a small ball to their belt and proceeds to try and evade capture. Should they be caught the Snitch is worth 30 points.

It should be noted that a goal scored by the Bludger also warrants 10 points.

It should also be noted that upon catching the Snitch the game ends, no matter what the current score is.

So after all that, How can you get involved with Quidditch?

Well, Quidditch is now a bonafide sport with its own official governing body, Quidditch UK. Beyond this, there are over 30 UK teams and a national team to boot. ‍

Find out more about Quidditch by clicking here. You can find a local team and get involved!

As I mentioned earlier, being an Organiser means you are inclined towards bringing people together.

What better way to exercise this gift than by organising a sports event?

Above we have outlined some exotic ideas but ultimately sport represents an opportunity to bring people closer, remaining active in the process.

However, as always, be wary of the Contributors and make sure you’re never left out of pocket having organised for everyone!

So get out there and have fun. Invite all your friends and family. And be sure to use Collctiv to minimise the headache of group payments!‍

Looking for more inspiration? Check out our other sport content  here

Also, don’t forget to get in touch with our social media. Let us know any unusual sports we may have missed? Or perhaps you tried some of the suggestions from this article?

We are at an exciting stage of our business with a lot of new app features on the way, so keep your eyes peeled for the latest Collctiv developments. Be the first to know and sign up for our Newsletter.‍