Being An Organiser At Halloween (Confessions From A Saturated Holiday) 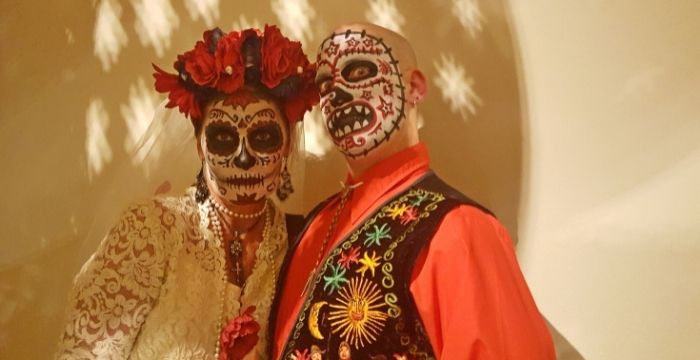 Why does Halloween have such a grip on our culture?

Being an organiser, Halloween becomes one of the many times of the year I'm relied upon to take on the responsibilities of others. Since joining Collctiv, I’ve become certain this reality is reflected upon organisers within all corners of life.

Students organise parties (but this time as Vampires.)

At the old folks home, spooky bingo is also organised!

So what do I make of all this?

In truth, my Jury is still out regarding Halloween. I see the far influence of this festival from over the pond. Reel back 30 years, had our parents even heard of Halloween? Let alone consider celebrating it?

I’ve heard the argument suggesting it's part of a continuous erosion of our culture from our cousins over the way.

I’ve also heard that same argument for the influence of social media.

I’ve also felt my neck bending to agree with both sentiments.

But this is probably a discussion to be held amongst friends.

Let's talk about the organisers at Halloween!

In truth, nothing changes. But then, nothing ever does.

Until the conclusion of time itself, we organisers will find ourselves being thrust into positions of responsibility to organise the fun things that the contributors want to be a part of yet won't organise themselves.

The annoying thing is, we also want to be a part of the fun things.

We are blessed with infinite foresight; should we not organise the fun we see it will likely never happen. We will be left miserable and couch tied. Watching other sexy cats and Dracula's snatching all the fun come October 31st.

I will use the example of a costume party I attended with a friend a few years back.

At the time I was living in London. He was in Liverpool and had invited me to a Halloween party the following weekend.

I had tentatively breached the subject of costumes a few days before the party. Should he shoot me a tenner, I could pick both of us a costume as we had intended and I could bring them up to Liverpool on the bus with me, no problems.

His response was: “Don’t worry about it mate, I will have it all sorted for when you get here.”

“Honestly man, Don’t worry about it! I'll buy the costumes; you can just pay me back when you get here!”

I came away from that chat with little optimism. But I'm a good friend, so I trusted him.

Fast forward to next weekend; the inevitable happened.

“Jake. Did you pick up the costumes like you said?”

“Man. I’m so sorry, I totally forgot. I’ve been so busy with uni and everything, I just forgot”

That was that then.

Needless to say, we spent the rest of the evening with CHANDLER and HOW YOU DOIN? hastily scrawled on each other's foreheads via Jake's girlfriend's Mascara. Which was not very Halloween at all.

For him, a contributor. Not much; we’re too good friends for me to hold a grudge.

As for myself, I couldn’t help but wonder what would have happened if I had collected the money from him a week previous and just gone with my gut to collect the costumes myself?

But I guess we can never know.

Take from that what you will.

Halloween represents something different to each person. Young people get a chance at costume based escapism. Children get the delight of dressing up as their favourite characters.

Old people who like to sit around with their proverbial pipes get to moan about America and the youth, in that order.

Where was I going with this?

I haven’t entirely made up my mind about Halloween yet. From the perspective of an Organiser, It succeeds in delivering yet another seasonal holiday where I am left running around and picking up the organisational incompetence of everyone else.

Having said that, I like the influx of gothic imagery, Dressing up like vague pop fiction characters and being able to make a fool of myself. Therefore, considering every aforementioned reason, I remain firmly on the fence.

What are your thoughts?

Take the stress from group payments! It’s free to download our app, click here for the app store or alternatively, here for google play!

Furthermore, check out our website for more information; more blog content. Including our take on why we are the best alternative to Money Pools.